There are many different condominium lifestyles offered in Chestermere.  Bungalow Villas with double car garages, two and three story townhouses, some with double detached garages, some with single and double attached.

The Reflections at 111 Rainbow Falls Gate built in 2017 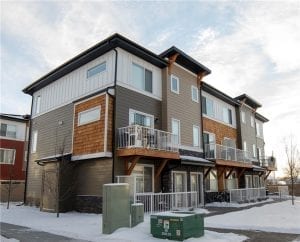 The Reflections were built in 2017 in Rainbow Falls in Chestermere. Double Garage attached.

Built in 2017, these  3 story  row townhouse  units  were absorbed very quickly.  There is an attached two car garage  There are two bedroom with 2 ensuites, and  three bedroom plans. 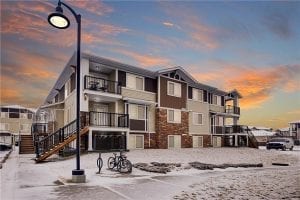 Chestermere Station has walk up apartments with outdoor parking spots.  These are two bedroom 1 bath units.    Condo fees are $133 per month.  Most people want indoor parking. 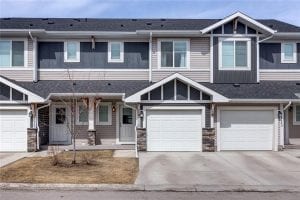 The Cascades Are Two Story Units With Full Basements.  Built in 2011 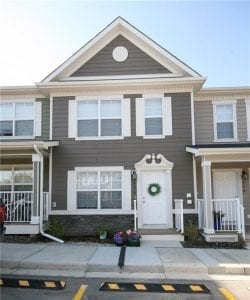 An affordable option in Chestermere. These condo’s have hardwood floors, glass tile backsplashes, fridge, stove and dishwasher are included in the price. There are two parking stalls, but no garages available. There is a full basement, which you can develop for extra space.  You can choose a two bedroom two ensuite unit, or a three bedroom with one bath up.  Condo Fees are $274/month.

These duplex style homes  range from 1600 to 2000 sq. ft.  These units were built by Reid Homes in 2007. They are  two storey units with double attached garage.  There are full basements, some with walkout.  You have a choice of two bedroomGeorgian Villas are the only adult only Development in Chestermere Built 2007s with bonus or a three bedroom plan.

Located in Westmere, some of these homes are backing onto a pond, next to a connector road,

Georgian Villas: The Only Adult only Development in Chestermere Built in 2007.

Projects such as Truman built in 2007 in Rainbow Falls are reselling  very well.  They were built at a good location, some homes backed onto a canal.  These were all bungalows with double attached garages and full with some walkout basements.   In my opinion these would have been better if they would have had a wider than 18' garage.   You could also consider a non-condo option such as Mattamy did up in Lakepointe with their townhouses.  Condo fees are $343 monthly.

The Brownstones at Chestermere Lake  Built between 2006 and 2014.

These are great units as they have a 2 car detached garage.  There are a variety of floor plans with 2 bedrooms and a den, a 3 bedroom plan, 2 bedroom & 2 baths upstairs.  There are full basements, with some being walkouts.  Units built in the later phase were better appointed and some had walkout basements. 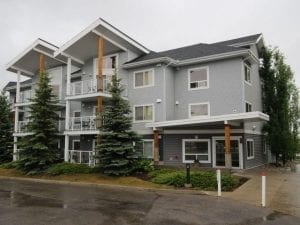 The Bayclub in Chestermere has one and two bedrooms apartments.

These apartment style units were built in 2005 for 390 Marina Drive, and 2006 for 380 Marina Drive.  There are one and two bedroom units.  Each unit has a stacking washer and dryer, a fridge, stove and dishwasher.  There is heated underground parking and exterior parking for a second stall for the two bedrooms.  There are balconys, or a concrete patio on the main floor units.  There are units that have a full lake view, units that back onto the green space between the buildings.  There is also a storage locker for bikes and other items in the garage.The one bedrooms range from 600 sq. ft. and the two bedrooms are between 830 to just 950 sq. ft.  All units come with one indoor heated parking spot.  Most two bedroom also have an outdoor stall that is assigned. The condo fees for one bedrooms are $340 two bedroom are $460. 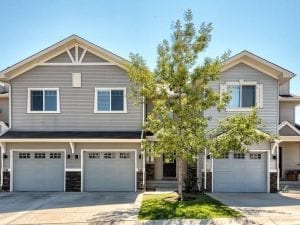 The Waterside Condos in Westmere Close to shopping. 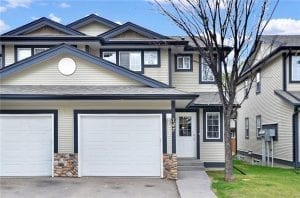 Login
Save Search
Recommended For You
Favorites
Email Alerts
Contact Us

Save favorite listings, searches, and get the latest alerts

close Back to Login
close

Save your favorite listings, searches, and receive the latest listing alerts